Soil Health: Traces of a Beginning

‘Soil Health: Traces of a Beginning’ is a series of poems by Edinburgh-based poet Vahni Capildeo which respond to Nasmille Larke-Majia’s research at the Earlham Institute into the microbial ecology of soils associated to different crops (sugarcane and coffee) and the Colombian Páramo environment. Vahni said:

‘Healthy soil is ‘alive’, with a diverse microbiome, an array of interdependent life forms and systems that lead to mutual flourishing and efficiency. Sadly, when soil is ‘cleaned’ for monoculture, the intensive farming of one crop, this damages and even kills the microbiome. The result of such cleaning is that more and more alterations have to be done to the soil for it to be capable of growing enough for harvests. Yet, eventually, the soil will be too dead to yield anything much.

‘However, life forms behave in unconventional ways. Some bacteria have evolved to eat the traces of explosives in soil. And soil health can be helped along by simple means, like introducing little goats to the environment. This gives us hope of finding ways to restore the microbiome and restore soil health.

‘Nasmille Larke-Mejía’s work ranges from fieldwork in ‘extreme environments’ to computer-based advanced interpretation of data. I was inspired by the mix of homeliness and complexity in Nasmille’s work and life. This moved me to write a sequence of poems in both experimental and simple forms. These poems range from the fictionalized story of someone growing up to be a woman scientist, to mock-instructions for soil cleaning or soil killing, a happy nursery rhyme of simple remedies, and a lament for the soil.

‘I hope this variety of approaches will interest different people in the question of soil health, that we depend on although we overlook it.’

do you mean shouting
i mean pressure

do you mean competition
i mean petroleum

do you mean war
i mean acidity and alkalinity

do you mean die
i mean go dormant

do you mean sleep
i mean live

do you mean survive
i mean flourish and thrive

do you mean exceptional
i mean expected

think of yourself like a microbe
think yourself into the microbiome

Monoculture of a Verse

Acquire a text. You may discover, seize, or ‘find’ it.

A heav’nly paradise is that place
Wherein all pleasant fruits do flow.

Clean the soil before monoculture.

There is
Where
is that place
Where

– But you’ve killed everything that’s there! Too many chemicals.

– It should be exactly the same, now I’ve put the seeds in.

Tell me again about a deliberately green and distinctive area
Where the human eye has fallen in love with funerals
And tell me how to find it because I own it, sweet, sweet,
And have never been there though I can taste it, unforgivable.

Add something that might kill everything: fertilizer, overwhelming the soil. You will see only what can resist high amounts of toxins. Overwhelming numbers of those.

In the vicinity of desert
might be air conditioning.
An emperor might ask his daughter
about her heart’s desire –
where did she see her future?
In extreme environments, Papa.
Older, in the absence of desert,
I’ll miss my hi-vis clothing,
bright yellow, small in a big, big hole,
fragranced with gasoline, not jasmine.

In the vicinity of mountain
can there be gendered expectation?
Might an emperor ask his daughter
about her self-reflection –
how does she face a future?
Five years at the computer, Papa,
in a room without colour,
facing colourful paper,
I’ll think of myself as a microbe
and of the soil’s living structure.
The soil is our skin!
I learn all the time.

Things do what you don’t expect them to.
Which are you, Reader?
Soil, microbe, emperor, child?

Life Forms Use Things That Are Non-Conventional

Five Things that Freaked Out a Poet

A list is a conventional form for a poem.

Conventional farming may lead to a point of no return.

you learn in school
little scuttling things
breathe through spiracles
you learn the skin
is the largest organ
of the human body
you won’t polish
your toenails
in case your toes can’t breathe
but, child,
who says
the soil has porosity?
emotion seeps into me
as I see the field
in which one thing
then nothing
can grow
the saying goes
may the road rise up to meet you
which big man says
soil, rise up, breathe, and live?
I feel myself crumbling
as the earth should crumble
but does not
a myriad creatures
continue their glad ways
n my gut
yet the soil microbiome
the skin of the earth
and its innards
have no words
for their breathless
their hardly recuperable state

Crop Rotation: A Nursery Rhyme for Sustainability in its Infancy

Poo, little goats, have a poo!

Since abundance is not diversity

Giving the soil what it needs

For abundance is not diversity

Replenished by a lagoon.

For enrichment is not toxicity

Poo, little goats, have a poo!

And enrichment is not toxicity 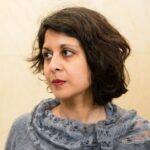 Vahni (Anthony Ezekiel) Capildeo FRSL is a Trinidadian Scottish writer of non-fiction and poetry. After completing a DPhil in Old Norse and translation theory, Capildeo worked at the Oxford English Dictionary, in culture for development (Commonwealth Foundation), and in academia. Their eight books and eight pamphlets include Measures of Expatriation (Carcanet, 2016) (Forward Poetry Prizes Best Collection award). Capildeo’s interests include silence, plurilingualism, site-specific themes (especially poetics of time in place), and performance traditions and practice. They are Writer in Residence and Professor at the University of York, a Visiting Scholar at Pembroke College, Cambridge, and an Honorary Student of Christ Church, Oxford. Image (c) Adrian Pope 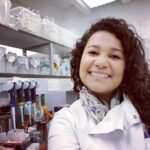 Dr Nasmille Larke-Mejía is a Postdoctoral Scientist on the GROW Colombia project working in the Agricultural Diversity Programme. She focuses on studying the microbial ecology of soils associated to different crops (sugarcane and coffee). Nasmille is an Environmental Microbiologist, specialized in the use of cultivation-dependent and cultivation-independent methods to study the microbial ecology of microorganisms in the terrestrial environment.

Nasmille finished her PhD in 2018 at the School of Environmental Sciences, University of East Anglia, working on characterizing soil and phyllosphere microorganisms that use isoprene as their sole source of C using techniques including stable isotope probing, amplicon sequencing and metagenome analysis.