‘The timekeepers of this city have perhaps witnessed a passer-by cosplaying as a poet before.’

In 2022, the National Centre for Writing will welcome four translators to Norwich for short residencies in the Dragon Hall cottage, as part of the Visible Communities programme.

In May, our translator in residence was Adrija Ghosh, a queer multilingual poet working with translingualism, memory, and the polycultural body. During this residency, Adrija worked on translating Rabindranath Tagore’s Bhanusingh’er Padabali.

In May 2022, I began my translation residency at Dragon Hall, Norwich. It was a short two weeks, commencing on my birthday which incidentally coincided with the birthday of the poet I chose to translate.

I started translating Rabindranath Tagore’s Bhanusingh’er Padabali – a collection of 22 songs on desire, devotion, and the grief of separation written in Brajabuli. Brajabuli is an artificial language; a mischsprache, deriving its lexicon from Sanskrit, Mythili, Prakrit, and Bangla. It is a language which exists as a function – used only for devotional songs depicting the romantic rendezvous (raas-leela) of Radha-Krishna in Vaishnavism.

It is difficult being born stacked against Tagore – I don’t think I will ever be Maa’s favourite poet. 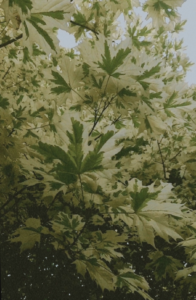 Every day I would wake up, translate a song, study semiotics, read Hurricane Season by Fernanda Melchor, and listen to Inayat Khan. Meanwhile, I would struggle with the knowledge that I felt estranged from the source text, the source language(s) so much so that it felt like I was haunting the breadth of the pages, in search of familiarity, or the relief of remembering. Despite several meals shared with friends and contemplating rehabilitation from loneliness spent in the company of others, I usually found myself beneath a bleaching sycamore on the bank of Wensum, a tree nestling the Fye Bridge Street by the Merchant’s House. I would usually take a longer route to get there, I would cross traffic lights and Elm Hill, white wisteria peeking out of Revelation, the scent of which would transport me back to the drowsy summer smell of জুঁই ; I would cross Tombland and peer in to see if any books stood out (and they often did), loiter inside for a while, landscaping the shelves before walking towards the tree which somehow reminded me of myself. It wasn’t a metaphor for anything, really. It could be – the way the tree hid half of its foliage drawn into itself, the bleached leaves fluttering in the breeze putting up a performance, especially against charcoal clouds in the pollen wind. For a second, I would really, really be stilled, and wonder if there was someone in the crowd who would appreciate this green and white natural pointillism, this rough exchange of pigment. Then, I would panic, I would panic through the course of the day and then throughout the night because there I was, like Tagore’s Radha looking at trees, sitting on forest floors and thinking how I yearned to share this shade, this grove, this autumn-stricken May. And no matter how much I patted the empty seat beside me, the wet soil, all eyes were turned towards the sky and all backs turned away from my tongue. As I continued to translate, poems would creep out of me, and with them crawled out the beast of fear from my belly. Had I really come that far? How different was it to walk the course of Wensum and be reminded of the Babughat ferry in the Ganga back home? How different was it from waiting for the impossible to come true by the banks of Yamuna? I wanted to draw comparisons to seek out commonalities, I was doing that through the translation, and I discovered that Tagore was not very far either. When Tagore wrote his own version of the lore, he refurbished its historicity. His depictions were both a homage and a study of the rich poetic oeuvres of Jayadev, Vidyapati and Chandidas. In modern terms, it is considered sampling – like Lauryn Hill in a Kanye West track. Tagore aligned a mainstream Hindu mythology with his Brahmo sensibilities and created Vaishnav songs of devotion, the expansive cross-pollination transformed the poems into a hybrid learning ground of different source cultures and traditions. Tagore infused his rendition with Modernist, Romantic, and Naturalist insights, presenting objective correlatives that metamorphosized eros into a much more subliminal experience, a longing with a vastness that flowed. One could not take away the musicality away even if one tried. The music was already set in stone – Tagore had specified the corresponding raga for the songs.

For example, the third song from the collection:

The heart’s desire wanes within,
unsoiled flowers deck the neck.
The night is borne and burnt by
the poison of parting, yet
Krishna does not arrive.

is based on the lalit raga, and each raga in Indian Classical music is evoked at a specific time. The Lalit is sung early in the morning and is grounded at a lower register; perfect for quiet introspection after a night of sleeplessness.

Translating the songs brought with it timekeeping, because Time functioned as an accessory. I wondered – do we desire differently during different parts of the day?

Does temporality account into finding fallacies within Nature that echo the gyrating longing in a lover’s body?

Radha is always thinking of her Shyam, always missing him, always waiting for him. She haunts the banks of Yamuna in perpetual anticipation and agony.

Do our bodies know that the loneliest hour is right before sundown when both workers and passerines abandon the streets along the Wensum and return to roosting?

Is it at that acute moment in the city crowd with its acute city noises when the body feels the grief of separation, the phantom presence of memory, homesickness, longing, familiarity?

The guise that Tagore takes – Bhanu Singh – means the Sun-Lion, alternatively the Sun Lord is also a role of a Timekeeper. The omniscient Sun who keeps an eye on Radha’s plight and often bemoans her lack of self-preservation. I wondered – what happens to desire as it travels the sundial?

In Norwich, there are three sundials I am familiar with – the St. Peter Mancroft sundial, the St. Andrew sundial, and the St. John Maddermarket sundial. The trail to visit the sundials is simple and replete with other iconic clocks in the city, the Bell Hotel clock, the Royal Arcade clock, and the St. Andrew clock amongst others. The timekeepers of this city have perhaps witnessed a passer-by cosplaying as a poet before.

The way the sun falls on this city, the way the Wensum turns, the way I age, the way linguistic boundaries are meant to be crossed, the way boundaries between Lauryn Hill, Kate Bush, and Ali Sethi are blurred because memory and the moment have a tendency towards osmosis – all part of the language which makes up the desperate acts of remembering. 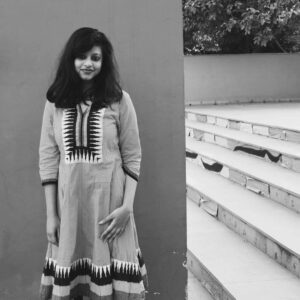 Adrija Ghosh is a queer multilingual poet working with translingualism, memory, and the polycultural body. They are currently enrolled in the MA Creative Writing (Poetry) course at the University of East Anglia. They recently wrote the script for Sifr, an Indian wlw short film exploring queer intimacy which was a runner-up at the Kashish QDrishti Film Grant 2021. They are passionate about decolonization, diversity, and inclusivity in the literary canon, research, and scholarship. They previously completed their Master’s in Comparative Literature from the University of Edinburgh, where they served as the Co-Editor of the peer-reviewed journal FORUM. Their poetry has appeared in the The Dark Horse Magazine, and more can be found on @byadrija on Twitter and Instagram.

‘Our ramble around the city turned into an adventure’

A practice in descriptive writing

How do you write about a place that you have never been to?