Natasha Brown is one of ten emerging writers in the running for the Desmond Elliott Prize 2022,‘the UK’s most prestigious award for first-time novelists’ (Telegraph). The winning author will receive a £10,000 prize along with a year-long package of support with the National Centre for Writing to help them progress their career. Stay tuned for the shortlist announcement on Tuesday 7 June.

Natasha Brown has spent a decade working in financial services, after studying Maths at Cambridge University. Assembly is her first novel and follows the story of a Black British woman working in the finance industry. Her novel tackles the stories we live within – those of race and class, safety and freedom, winners and losers – and it is about one woman daring to take control of her own story, even at the cost of her life. Natasha developed Assembly after receiving a 2019 London Writers Award in the literary fiction category. Get to know the author behind the words below.

Assembly is longlisted for the Desmond Elliott Prize 2022. Find out more →

It’s tempting to draw conclusions about how literature might solve seemingly intractable problems, such as racism or misogyny, where conventional politics has failed. But Assembly is far too subtle and elegant to pander to our desire for quick fixes.

‘What does it mean to subvert expectations?’ she asks. ‘By subverting them, you’re pointing to them, so is it really a true subversion? I feel making a case for having that meta-discussion and discussing the language itself is going to be a necessary part of how we break out of these expectations and stories. If I’m trying to make any point, it was that one.’

All I knew was that I wanted to explore some of the ideas I’d been reading in non-fiction to try and find a story that would hopefully bring them to life. And I just sort of immersed myself in the world and the characters and when I saw where it was going, I just tried to follow it. 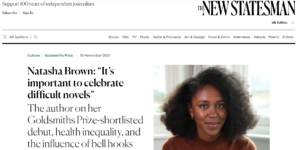 Read an interview with Natasha Brown in the New Statesman →

In the UK and US, black women have higher breast cancer mortality rates than other groups; there is a significant “excess mortality” that is not explained by socio-economic background, co-morbidities or other known factors. The excess mortality is greater for younger women in the UK. A similar disparity in health outcomes is present in many other areas – the death-in-childbirth rate is especially heartbreaking. This is a society-level phenomenon, and it haunts the narrator. Whatever she decides to do, it doesn’t change this broader situation – perhaps that’s the thematic heart.

Listen to a podcast episode with Natasha Brown on Literary Friction →

Social hierarchies and the metrics of status and success are a part of life accepted by some and rejected by others, but whatever your position, they are hard to escape. Natasha Brown, whose debut novel Assembly follows a Black British woman preparing for a garden party at her boyfriend’s family estate, and thinking through the stories she exists within – stories of class, race, and the meaning of success.

Where can I buy Assembly?

Check out your local bookshop to buy a copy of Natasha’s ‘astonishing‘ (Bernardine Evaristo) first novel. Or head to Bookshop.org to support independent bookshops countrywide. Here’s a hand-pick of our favourites:

Get to know… Emily Itami