Get to know… Mona Arshi

Mona Arshi is one of ten emerging writers in the running for the Desmond Elliott Prize 2022,‘the UK’s most prestigious award for first-time novelists’ (Telegraph). The winning author will receive a £10,000 prize along with a year-long package of support with the National Centre for Writing to help them progress their career. Stay tuned for the shortlist announcement on Tuesday 7 June.

Mona Arshi worked as a human rights lawyer with Liberty for a decade before receiving a master’s in creative writing from the University of East Anglia. Somebody Loves You is her debut novel and follows Ruby, a young girl who gives up talking. Silence becomes Ruby’s refuge, sheltering her from the weather of her mother’s mental illness, the vagaries of her sister’s moods, and a pressurized suburban atmosphere. Plangent, deft, and sparkling with wry humour, Somebody Loves You is a moving exploration of how we choose or refuse to tell the stories that shape us. Get to know the author behind the words below.

Somebody Loves You is longlisted for the Desmond Elliott Prize 2022. Find out more →

Watch Mona discuss ideas of religion, communication and family in her conversation with Dzifa Benson →

Mona Arshi’s debut poetry collection Small Hands won the Forward Prize for best first collection in 2015. She regularly makes appearances on radio and her poems and interviews have been published in The Times, the Guardian, Granta and The Times of India, as well as on the London Underground. Now an Honorary Professor of English and Law at the University of Liverpool, the award-winning poet will be discussing her new novel Somebody Loves You and reflecting on the experience of moving from poetry to prose with Dzifa Benson, writer, producer and performance maker.

Somebody Loves You is so poetic. It is in a hybrid space, where I am using poems to tell some of the story, and also to explicate some of the protagonist’s feelings. To do it in prose poetry, to me, felt really natural, so I kind of flick between the two and somehow they fuse together in this book and create something hybrid, something that has the power of poetry and the linear progression of a novel.

Tell us about the experience of recording Somebody Loves You. 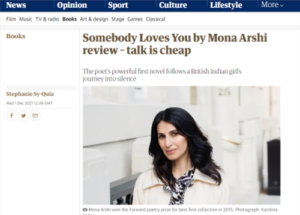 Ruby stumbles over the word ‘sister’ at school one day, and abruptly stops talking altogether. This isn’t a vow of silence so much as a renunciation of speech, an attempt to opt out of a world incapable of engaging with what she has to say beyond overemphasising the ethnicity of the speaker. For Ruby, speech is an inadequate mechanism for self-presentation: ‘The first thing you start doing when you start talking is editing.’

Where can I buy Somebody Loves You?

Check out your local bookshop to buy a copy of Mona’s ‘masterful‘ (Jo Heygate) first novel. Or head to Bookshop.org to support independent bookshops countrywide. Here’s a hand-pick of our favourites: 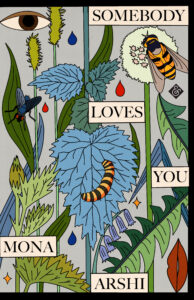 Get to know… Elizabeth Chakrabarty