Luke Cassidy is one of ten emerging writers in the running for the Desmond Elliott Prize 2022,‘the UK’s most prestigious award for first-time novelists’ (Telegraph). The winning author will receive a £10,000 prize along with a year-long package of support with the National Centre for Writing to help them progress their career. Stay tuned for the shortlist announcement on Tuesday 7 June.

Luke Cassidy is a writer from Dundalk, Ireland. He has adapted his novel, Iron Annie, for the stage as the Iron Annie Literary Cabaret, a spectacle of spoken word and music based on the book, which will tour twenty theatres in Ireland with the support of the Irish Arts Council. A short story of his, A Good Turn, will be featured in the forthcoming New Island Books anthology of writing from the Irish border region, The New Frontier. Iron Annie is his first novel.

Iron Annie is longlisted for the Desmond Elliott Prize 2022. Find out more →

Read a review of Iron Annie in Independent Ireland →

Luke Cassidy’s startling debut is the story of the novel’s narrator Aoife – her work, her friends, her dreams, hopes and fears – all told through the lens of her doomed love affair with the occasionally cross-dressing Iron Annie of the title.

Set as it is around Dundalk – “the Town” – in Louth, the most beautiful county in Ireland, the book was always a likely winner.

Indeed, in a novel that is heavily laden with colourful characters from Dundalk’s underworld, the Town itself holds its own as a living breathing entity. Aoife and her associates, while seemingly living on the fringes of society, are very much at the centre of the Town’s activities – it’s not called El Paso for nothing.

The challenge in adapting the story from a book to a stage show was primarily in how to tell a meaningful story taken from the book without it feeling partial. The book, with its road trip to offload ten kilos of cocaine, and regular trips down memory lane, is not at first glance the best suited for adaptation to the stage. So I honed in on the story of Aoife falling for Annie, focusing on the intensity of that fatal connection. Read more 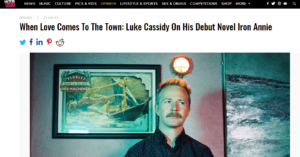 I think part of the reason that Dundalk is as fecund as it is today is down to the fact that we are not burdened by precedents in that sense.

We don’t have this feeling of ‘I’ll never write as well as James Joyce’; you don’t even think about it in the moment of writing .There’s a willingness to take risks and to fail.

The Iron Annie Cabaret is a celebration of music, theatre and literature. Based on Luke Cassidy’s debut novel ‘Iron Annie’, it tells the story of Aoife, a major figure in a small-town Irish underworld, and her fatal attraction to Annie, a magnetic and elusive force that barged into her life. Think ‘Reservoir Dogs’ meets ‘Thelma and Louise’ meets ‘The Rocky Horror Picture Show’. 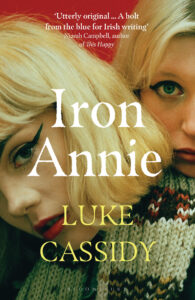 Where can I buy Iron Annie?

Check out your local bookshop to buy a copy of Natasha’s ‘emotional rollercoaster of a story‘ (Peter James). Or head to Bookshop.org to support independent bookshops countrywide. Here’s a hand-pick of our favourites:

Get to know… Emily Itami