Join us to celebrate the publication of the new Tilted Axis Press anthology asking questions about whiteness, the canon, and imperialism. Violent Phenomena: 21 Essays on Translation is edited by Kavita Bhanot and Jeremy Tiang.

Frantz Fanon wrote in 1961 that ‘Decolonisation is always a violent phenomenon,’ meaning that the violence of colonialism can only be counteracted in kind. As colonial legacies linger today, what are the ways in which we can disentangle literary translation from its roots in imperial violence? In this anthology, 21 writers and translators from across the world share their ideas and practices for disrupting and decolonising translation.

You can hear from four of those writers and translators – Sofia Rehman, Elisa Taber, Sandra Tamele and Nariman Youssef – in a discussion chaired by Kavita Bhanot.

This event will take place on YouTube. Book your place for free in advance to receive a streaming link.

Violent Phenomena is supported by Arts Council England and the Jan Michalski Foundation as part of Visible Communities, a National Centre for Writing project.

This event is in partnership with BCLT and Tilted Axis Press. 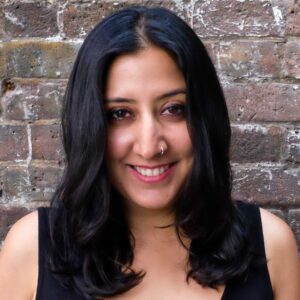 Dr Kavita Bhanot is ECR Leverhulme Fellow at Leicester University. Her fiction, non-fiction and academic work has been published, performed and broadcast widely, including the landmark essay ‘Decolonise not Diversify’ and her Tedx Talk ‘Reading, Writing and Self-Interrogation’. Kavita founded the Literature Must Fall Collective – her monograph exploring these ideas will be published in 2022 by Pluto Press. She also works as an editor and mentor. Her first novel came third in the 2018 SI Leeds Literary Prize. She has edited three collections of short stories and is co-editor of Violent Phenomena, with Jeremy Tiang, to be published in July 2022 by Tilted Axis Press. She is currently organising Jaag, a Punjabi Literature Festival in Birmingham 2023. Dr Sofia Rehman is an independent scholar specialising in Islam and Gender, an author, and educator. She works primarily with classical Arabic texts. She is also Acquisitions and Editorial Executive at Neem Tree Press where she has focused on translated texts from a range of languages. During the global pandemic she launched the Islam and Gender read alongs in which she facilitates readings of academic texts by Muslim female scholars in conversation with a global audience and has been featured by Vogue Arabia, Refinery29 and The Independent. She is a contributor to Mapping Faith: Theologies of Migration and Cut From the Same Cloth?. She has publications due out with Oxford University Press and Kube Publications. Elisa Taber is a writer, literary translator, editor at Slug and Seven Stories Press, and PhD candidate at McGill University. Sandra Tamele dreamed of being an Architect, but after three failed attempts to secure a job in this field she decided to pursue her other passions, translation and languages, on a full-time basis. 2007 marked her debut as a literary translator, and she has since translated 21 works of poetry, prose, and children’s literature from English and Italian into Portuguese. She is passionate about her work and committed to promoting literary translation among young Mozambicans by hosting an annual competition, which led to the establishment of the publishing house Editora Trinta Zero Nove, the first Mozambican publisher dedicated to literature in translation. This start-up strives to give voice to debut, black, female authors, and writers with disabilities or from other minorities to work towards a more inclusive, loving society. In 2021, the initiative was awarded the London Book Fair International Excellence for Literary Translation prize. Tamele was born in Pemba, but currently lives with her husband in Marracuene, where she plans to open the first bookshop/community library in the district of over 262,000 inhabitants.

Nariman Youssef is a Cairo-born literary translator based in London. She manages an Arabic translation team part-time at the British Library and has led and curated translation workshops with Shadow Heroes, Shubbak Festival and Africa Writes. Her recent translations include Mo(a)t: Stories from Arabic (UEAP, 2021), Inaam Kachachi’s The American Granddaughter (new edition, Interlink, 2020), Donia Kamal’s Cigarette No. 7 (Hoopoe, 2018), and contributions to publications like The Common, Arab Lit Quarterly, Words Without Borders. Nariman holds a master’s degree in Translation Studies from the University of Edinburgh.

Join us to celebrate the publication of the new Tilted Axis Press anthology asking questions about whiteness, the canon, and imperialism. Violent Phenomena: 21 Essays on Translation is edited by Kavita Bhanot and Jeremy Tiang. Frantz Fanon wrote in 1961 that ‘Decolonisation is always a violent phenomenon,’ meaning that the violence of colonialism can only […]