Nadiyah Abdullatif is a translator and editor based in Scotland. She translates from Arabic, French and Spanish into English. She is currently working on an English co-translation of a Lebanese graphic novel, Murabba wa Laban by Lena Merhej, an extract of which recently appeared in literary arts publication The Markaz Review. She is also a copy editor for Asymptote, one of the leading online journals of literature in translation. This will be her first residency. She wishes to spend the residency time working on literature from the Indian Ocean islands, and in particular, from Mauritius, the country of her birth. She holds an undergraduate degree from the University of St Andrews in Modern Languages (Arabic and Spanish) and International Relations and a Masters in Islamic and Middle Eastern Studies from the University of Edinburgh.

‘I applied to the residency with the aims of diversifying routes into and decolonising literary translation, this programme creates an excellent space to take forward the work I am most passionate about in a supportive residency environment where I can discuss my work with and learn from other translators.

During the residency I’ll be working on literature from the Indian Ocean islands, with a particular focus on Mauritius, the country of my birth.’ Lydia Hounat is a British-Algerian (Kabyle) writer, photographer and translator from Manchester, England. She translates from French and Taqbaylit into English. She was previously a Writer-in-Residence for Manchester Metropolitan University’s Special Collections’ Archives, with her work appearing in HOBART, MAI Journal: Feminism & Visual Culture, and TOLKA. She is a co-curator for the French and Imazighen poetry collections at Manchester Poetry Library, and is currently collaborating with the Writing Squad’s Writing the Archive project and Poetry Translation Centre’s UNDERTOW.

‘I am so pleased to be joining the Visible Communities residency alongside some wonderful translators. For a long time I have been looking to work alongside kindred spirits that share in their affinity for translation and language preservation, but also to find companionship amongst other practitioners working to further integrate indigenous oral languages into UK translation. I’m very grateful to NCW for providing this programme to create this invaluable space.

For my work, I will be looking at intergenerational conversations through translation, and looking at how a static oral language like Taqbaylit (amongst other Tamazight languages of North Africa) accommodate the ever-changing context of history and trauma. I’m particularly focused on how this pertains to the voices of Kabyle women in Algeria, our customs and ritual practices. I’m also looking to question what it means to be a translator from the diaspora, navigating multi-heritage, translating work from beyond its origins, and to discuss this with fellow translators.’ Vineet Lal is a literary translator from French to English, based in Scotland. In 2010 he was awarded one of the first-ever Mentorships in Literary Translation by the British Centre for Literary Translation, with Sarah Ardizzone, and in 2011 published his first full-length translation, Lacrimosa by Régis Jauffret. His first translated children’s book, Panthera Tigris by Sylvain Alzial and Hélène Rajcak, was published in October 2019 (a co-translation with Sarah Ardizzone) and his translation of The Woman Who Didn’t Grow Old by Grégoire Delacourt came out in February 2020. His translation of The Secret Life of Writers by Guillaume Musso came out in June 2021.

‘I’m absolutely thrilled to be one of several Virtual Translators in Residence with NCW this spring – such a wonderful opportunity to engage with fellow translators who share so many of the same areas of interest, and to find a safe space to reflect on key themes and issues that affect us all, in one way or another. I am hugely grateful to NCW for this superb initiative.

I’m looking forward to delving into some of the issues that I’ve been thinking about ever since I began my journey in translation some ten years ago – and how some of those have been highlighted, and magnified, by the pandemic. In particular, the challenges of being an emerging, or early career, translator, of looking after your mental health, of finding ways to maintain confidence and find sustenance in difficult times. And how one’s ethnicity, or external perceptions of one’s ethnicity, can be a factor in that equation.’ Coco Mbassi was born in Paris, France and originates from Cameroon. By the age of nine, she spoke five languages. She trained as a translator in Paris and in the UK. A lover of all artforms, Coco has toured as a musician for over 30 years, winning several awards and releasing three albums, an innovative musical project and a single. She never gave up on her love of languages and has translated three books in the past five years and written a bilingual illustrated book for children. Coco trained as a scriptwriter for television and theatre and wrote her first musical, Haendel on the Estate; extracts of the musical were performed at Ovalhouse Theatre in London in February 2019, with a full performance of the musical in London in November 2020. She is now writing another musical with her writing partner and plans to do more literary translation work, with a focus on non-standard hybrid language forms from sub-Saharan Africa, such as Pidgins or Camfranglais. She also hopes to complete her first novel by 2023. Website

‘I applied for the residency because I saw it as a wonderful opportunity to explore ways of improving literary translation related to postcolonial contexts and it’s so great to be supported while doing it.’ Born in Bangladesh, Shagufta Sharmeen Tania initially trained as an architect. Her fiction and non-fiction have been published in both Bangladesh and India. To date she has authored nine books and translated Susan Fletcher’s Eve Green and Antonio Skarmeta’s Burning Patience, from English to Bengali. Her work has appeared in Wasafiri, Asia Literary Review, City Press and a Speaking Volumes Anthology. She has recently finished working on a Bengali-English translation of her short story collection (for which she received an Arts Council Grant.) Currently, she is working on a fictionalized biography of a celebrated musicologist, a nonfiction based on the changes in cityscapes. Shagufta was the youngest recipient of Bangla Academy Syed Waliullah Award (2018) for outstanding contribution in Bangla literature, and her short story ‘Sincerely Yours’ was long listed for the BBC Short Story Award 2021. About three years ago she wrote a series of retold fairy tales based on Dakshinaranjan Mitra Mazumder’s (like the Grimm Brothers, he was a collector of ancient fairytales of Bengal) collected works, which she will self-translate during her virtual residency.

‘I applied as the stated ethos of this residency encompasses many issues that I care passionately about: the power of translated language to shed a light on disparate communities and cultures, and to dismantle barriers between them, and the importance of giving a voice to the marginalised – be it the female heroines in stories, or those unfairly overlooked in the world of translation.

Language, storytelling, and the business of conveying with passion and precision all the rich nuances of my native language to a new readership (nuance which contains so much of the heritage and cultural riches of Bangladesh ) : to me, there is no more important work, and it’s work which I feel privileged to be given an opportunity to undertake.

I will self-translate my collection of re-interpreted Bengali fairy-tales, utilising the heightened, stylised language of Dakshinaranjan Mitra Majumder, one of the great curators of Bengali oral storytelling and fairy-tales. Retold fairy-tales allow for positive representations of female characters – sorely lacking in the original material – and can break free of the old patriarchal archetypes of women.’ Shash Trevett is a Tamil from Sri Lanka who came to the UK to escape the civil war. She is a poet and a translator of Tamil poetry into English. Her pamphlet From a Borrowed Land (which includes original translations) will be published in 2021 by Smith|Doorstop. She is currently editing (and translating), with Vidyan Ravinthiran and Seni Seneviratne, an anthology of Tamil, English and Sinhala poetry from Sri Lanka and its diaspora communities which will be published by Bloodaxe. Shash’s Visible Communities residency took place between January and April 2021.

Gitanjali Patel is a translator and social researcher. She graduated from Oxford University in Spanish and Portuguese and has been translating from these languages since 2010. She translates in a range of media, from film scripts and radio programmes to fiction, including stories by Luisa Geisler, Miriam Mambrini, Fernanda Torres and, most recently, Evando Nascimento. In 2016 she co-founded Shadow Heroes, an organisation which engages secondary school students in critical thought using the art of translation. Gitanjali’s Visible Communities residency took place between May and August 2021. 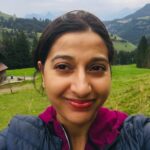 Sawad Hussain is an Arabic translator and litterateur who is passionate about bringing narratives from the African continent to wider audiences. Her translations have been recognised by English PEN, the Anglo-Omani Society, the Short Story Day Africa Prize, and the Palestine Book Awards, among others. She has lectured at IAIS at the University of Exeter, taught KS3 & KS4 Arabic in Johannesburg and Dubai, and run workshops introducing translation to students and adults under the auspices of Shadow Heroes, Africa Writes and Shubbak Festival. She holds an MA in Modern Arabic Literature from SOAS. Sawad’s Visible Communities residency took place between May and August 2021.