Looking for things to do for the rest of the summer holidays? Whether you’re relaxing in the garden or at the beach, or need something to keep you entertained on those rainy days, we recommend heading over to your local library and getting stuck into a good story.

But where to start? We asked librarians and teachers (and a few members of the NCW team) for their top recommendations! 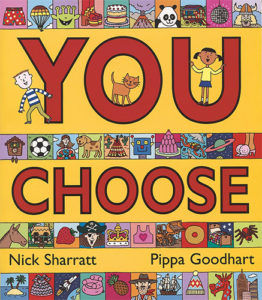 Imagine you could go anywhere, with anyone and do anything. Where would you live? Where would you sleep? Who would be your friends? What games would you play? Go on . . . you choose! With the help of Nick Sharratt’s wonderfully detailed illustrations, Pippa Goodhart looks at a whole range of scenarios where choosing is made fun!

“I’ve only recently discovered the You Choose series of books although I understand they are pretty popular. On each page you are presented with a choice…where you would like to live (mountain top, cave, tipi, igloo), what would like to wear (Elvis costume, Dracula mask, suit of armour etc). They provide a great starting point for all sorts of discussions, kids seem to love them and the best thing – as I’m sure most parents will relate to – is that they are not at all tedious to read time and time again with your kids!” – Alice Kent, Communications Director, National Centre for Writing 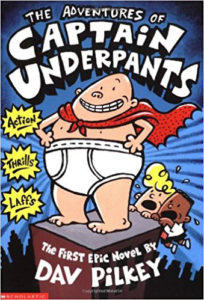 Pilkey plays with words and pictures, providing great entertainment. The story is immediately engaging — two fourth-grade boys who write comic books and love to pull pranks find themselves in big trouble. Mean Mr. Krupp, their principal, videotapes George and Harold setting up their stunts and threatens to expose them. The boys’ luck changes when they send for a 3-D Hypno-Ring and hypnotize Krupp, turning him into Captain Underpants, their own superhero creation. Later, Pilkey includes several pages of flip-o-ramas that animate the action. The simple black-and-white illustrations on every page furnish comic-strip appeal. The cover features Captain Underpants, resplendent in white briefs, on top of a tall building.

“The stories are extremely daft and designed to appeal to a 5-year-old’s key interests and concerns (farts, bums, snot, evil teachers, robot toilets, wedgies), while the presentation is endlessly inventive and frequently deconstructs what a book ‘is’ and how stories are told. They pull apart book interior formatting to make jokes, shift from prose to comic book panels to flip-book animation and back again and generally encourage an irrepressible love of storytelling and creativity.” – Simon Jones, Digital Marketing Manager, National Centre for Writing 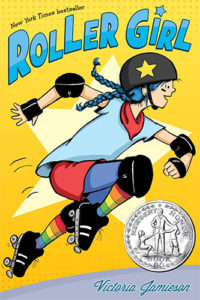 For fans of Raina Telgemeier’s Smile, a heartwarming graphic novel about friendship and surviving junior high through the power of roller derby.

Twelve-year-old Astrid has always done everything with her best friend Nicole. So when Astrid signs up for roller derby camp, she assumes Nicole will too. But Nicole signs up for dance camp with a new friend instead, and so begins the toughest summer of Astrid’s life. There are bumps and bruises as Astrid learns who she is without Nicole…and what it takes to be a strong, tough roller girl. 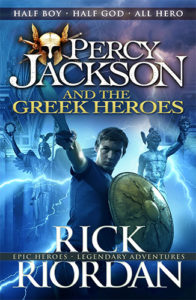 Rick Riordan’s fun, fast-paced Percy Jackson series follows the adventures of young demigod (half mortal, half Greek god) Percy and his friends Annabeth and Grover. And the story continues in the thrilling Heroes of Olympus spin-off series.

“These books are great because they’re adventurous and funny, but you also learn loads about Greek gods. It’s a nice read!” – School Teacher 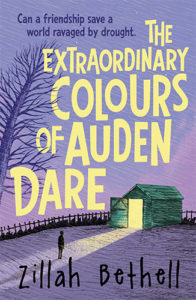 I am how I’ve always been.
My name is Auden Dare.
I am eleven years old.

Auden Dare has an unusual perspective on life: he cannot see in colour. He’s always had this rare condition – and life is beginning to get harder for Auden. The war for water that is raging across the world is getting a little closer all the time. Auden has to learn to live without his father, who is away fighting, and has had to move to a new town with his mother, and start a new school, where everyone thinks he’s a weirdo. But when he meets Vivi Rookmini, a smiling girl bright with cleverness, his hopes begin to lift.

Then Auden and Vivi make an extraordinary discovery. Hidden away under the shed at the bottom of Jonah’s garden is an enigmatic and ingenious robot, who calls himself Paragon. A talking, walking, human-like robot. Apparently built by Jonah – but why? The answer to this will take Auden and Vivi on a thrilling journey of discovery as they seek to find out just what exactly Paragon is – and what link he has to Auden – and find that the truth is bigger and more wonderful than either of them could have imagined.

“Against an apt backdrop of a world war over water, a young boy and his new friend discover a robot made by his dead uncle. A dramatic adventure ensues, by the end of which the children – and readers – have had to revise their views on what it means to be human – great for empathy.” – Harriet Cox, Librarian, Education Library Service 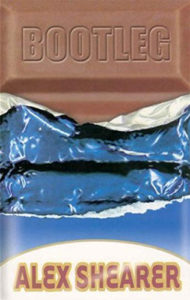 No more chocolate! What? It is the new century and the government in power is called the Good For You Party. Do they really know best when it comes to health policies, closing down all the burger bars and chip shops in the country?

Through the introduction of so-called healthy snacks and re-education programmes, the Good For You Party is striving to build a happier and healthier population. But when it comes to banning chocolate it seems they may have gone a step too far, and Huntly and his friend Smudger find it hard to abide by the new laws. Together with local shopkeeper Mrs. Bubby, the boys devise a cunning plan to restore freedom, justice and chocolate for all … with amazing results!

“Relevant and engaging novel dealing with legal and moral discussions of right and wrong in a manner which is accessible to readers.” – C. Ribbands, Year 6 Teacher/English Co-ordinator, Firside Junior School 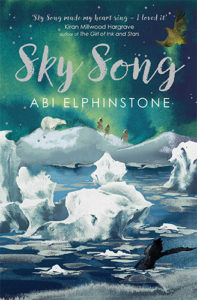 In the snowy kingdom of Erkenwald, whales glide between icebergs, wolves hunt on the tundra and polar bears roam the glaciers. But the people of this land aren’t so easy to find. Because Erkenwald is ruled by a cruel Ice Queen and you must stay hidden or risk becoming another of her prisoners.

Join Eska, a girl who breaks free from a cursed music box, and Flint, a boy whose inventions could change the fate of Erkenwald forever, as they journey together in search of an ancient, almost forgotten, song with the power to force the Ice Queen back.

This is a story about an eagle huntress, an inventor and an organ made of icicles. But it is also a story about belonging, even at the very edges of our world…

“An exciting adventure set in a vivid, frozen landscape. Two children discover lots about themselves and each other, and there is a touching relationship between the boy and his younger sister.” – Harriet Cox, Librarian, Education Library Service 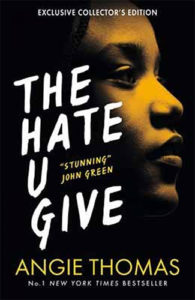 The Hate U Give
Angie Thomas

Sixteen-year-old Starr Carter moves between two worlds: the poor neighbourhood where she lives and the fancy suburban prep school she attends. The uneasy balance between these worlds is shattered when Starr witnesses the fatal shooting of her childhood best friend Khalil at the hands of a police officer. Khalil was unarmed.

Soon afterwards, his death is a national headline. Some are calling him a thug, maybe even a drug dealer and a gangbanger. Protesters are taking to the streets in Khalil’s name. Some cops and the local drug lord try to intimidate Starr and her family. What everyone wants to know is: what really went down that night? And the only person alive who can answer that is Starr.

But what Starr does or does not say could upend her community. It could also endanger her life. 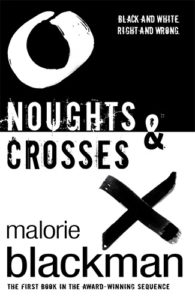 Two young people are forced to make a stand in this thought-provoking look at racism and prejudice in an alternate society.

Sephy is a Cross — a member of the dark-skinned ruling class. Callum is a Nought — a “colourless” member of the underclass who were once slaves to the Crosses. The two have been friends since early childhood, but that’s as far as it can go. In their world, Noughts and Crosses simply don’t mix. Against a background of prejudice and distrust, intensely highlighted by violent terrorist activity, a romance builds between Sephy and Callum — a romance that is to lead both of them into terrible danger. Can they possibly find a way to be together?

“It had a huge impression on me when I was younger because of its use of pace and communication on social issues.” – Becky Demmen, Freelance Facilitator 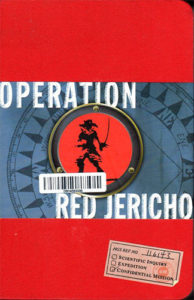 For Joshua Mowll, it was the surprise of a lifetime. There, among the archives inherited from his great-aunt Rebecca MacKenzie, was a 1920’s journal recounting the thrilling and dangerous adventures of fifteen-year-old Rebecca and her younger brother, Doug, in the wake of their parents’ mysterious disappearance in the deserts of China. Now carefully re-created in a lavish volume complete with cloth binding and a journal-style elastic clasp, the siblings tale begins aboard the Expedient, their uncle’s enigmatic research ship, and moves at a breathless pace through the streets of Shanghai and on to a terrifying island fortress. Along the way, Doug and Becca encounter an ancient order of Chinese mercenaries, a brutal pirate warlord, a feisty Texan heiress, and a stolen cache of a volatile explosive called zoridium. By their saga’s end, the intrepid duo has exposed a murderous plot involving their parents and uncovered a high-minded secret society hidden from the world for hundreds of years. Interspersed are such archival elements as: elaborate diagram and maps, vintage photos and illustrations, documents with stamps, seals, and watermarks, four full-colour gatefolds, the largest a six-page foldout, extensive appendices and notes.

“Great story, creatively told with interactive elements like fold-outs and ‘images of proof’. It really took me away to another world and showed me that you can be creative with the layout and presentation of your story.” – Becky Demmen, Freelance Facilitator