What with the scorching weather we’ve been having*, there’s little else we can muster our energy to do than find a perfectly shady spot and enjoy a good book. We did a whip-round in the office to see what our team members are reading – and why these books should go immediately to the top of your pile. 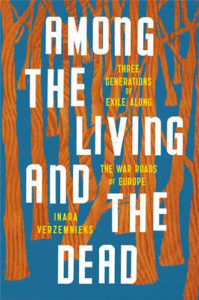 Among the Living and the Dead
Inara Verzemnieks

“I first encountered Inara Verzemnieks at the Mission Creek Festival during my visit to Iowa UNESCO City for a City of Literature meeting in April; now I’m excited to have a copy of her – I’m led to believe – remarkable book, Among the Living and the Dead: A Tale of Exile and Homecoming. War, migration, shame and loss – it attempts to put the unspeakable into words. I can’t wait to read it and to hear her speak about it with Aida Edemariam at Edinburgh International Book Festival (20th August).”

Raised by her Latvian grandparents in Washington State, Inara Verzemnieks grew up among expatriates, scattering smuggled Latvian sand over the coffins of the dead, singing folk songs with other children about a land none of them had visited. Her grandmother’s stories re-created in vivid, nostalgic detail the family farm she’d left behind in a borderland violently contested during the Second World War. In the fighting, her grandmother Livija and her grandmother’s sister, Ausma, were separated and would not see each other again for more than fifty years.

Journeying back to the remote village where her family broke apart, Inara comes to know Ausma and the trauma of her exile to Siberia under Stalin, while reconstructing Livija’s survival through her years as a refugee. In bringing together these two sides of the family story, Inara honours both sisters in a deeply cathartic and moving account of loss, survival, resilience, and love. 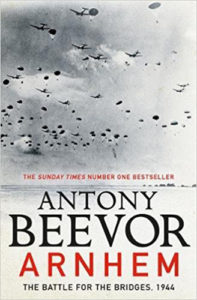 Arnhem: The Battle for the Bridges, 1944
Antony Beevor

The British fascination with heroic failure has clouded the story of Arnhem in myths. Antony Beevor, using often overlooked sources from Dutch, British, American, Polish and German archives, has reconstructed the terrible reality of the fighting, which General Student himself called ‘The Last German Victory’. Yet this book, written in Beevor’s inimitable and gripping narrative style, is about much more than a single, dramatic battle.

It looks into the very heart of war. 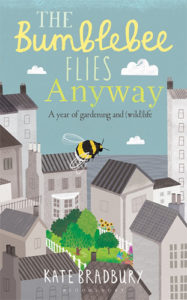 Finding herself in a new home in Brighton, Kate Bradbury sets about transforming her decked, barren backyard into a beautiful wildlife garden. She documents the unbuttoning of the earth and the rebirth of the garden, the rewilding of a tiny urban space. On her own she unscrews, saws, and hammers the decking away, she clears the builders’ rubble and rubbish beneath it, and she digs and enriches the soil, gradually planting it up with plants she knows will attract wildlife. She erects bird boxes and bee hotels, hangs feeders and grows nectar- and pollen-rich plants, and slowly brings life back to the garden.

But while she’s doing this her neighbours continue to pave and deck their gardens. The wildlife she tries to save is further threatened, and she feels she’s fighting an uphill battle. Is there any point in gardening for wildlife when everyone else is drowning the land in poison and cement?

Throughout her story, Kate draws on an eclectic and eccentric cast of friends and colleagues, who donate plants and a greenhouse, tolerate her gawping at butterflies at Gay Pride, and accompany her on trips to visit rare bumblebees and nightingales. 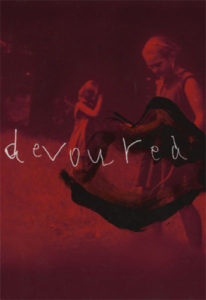 “This book wasn’t what I expected. Set in deep, rural Norfolk and written from the perspective of a 12-year-old girl, it is both very dark and very funny. Plus, it is published by Propolis, the imprint of The Book Hive!”

Swallow’s Farmhouse in deep, rural Norfolk is home to Your People, a commune of free-thinkers and poets seeking a better way. But beneath the veneer of a nurturing, alternative lifestyle, and atmosphere of jealousy and threat is pushing utopia towards the brink of its inevitable collapse.

Raising herself amidst the chaos is a twelve-year-old survivor, desperately preoccupied with her transition into womanhood. With her mute sister, beloved dog and the re-defining force of her emerging appetites, she marches resolutely towards her future, venturing – with hilarious and horrifying results – through the minefield of an adult world built on hypocrisy and misplaced ideals. 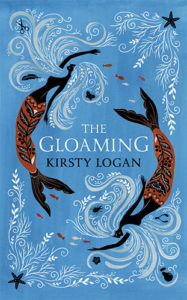 “Set on a Scottish island, an enchanted place where grief lives and family ties are thoroughly tested, a tender exploration of love and belonging.”

Mara’s island is one of stories and magic. She knows she’ll eventually end her days atop the cliff, turned to stone and gazing out at the horizon like all the villagers that went before her, drawn by the otherworldly call of the sea. Her whole family will be there too, even her brother Bee and her sister Islay.

But the island and the sea do what they want, and when they claim a price from her family, Mara’s world changes forever.

As years pass and Mara grows into herself and her scars, a chance meeting with the magnetic Pearl brings magic to life once more in ways that Mara never thought possible, in a story that she never would have dreamed for herself before. 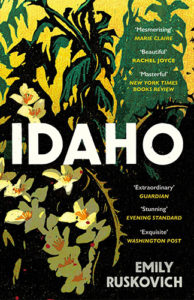 “Told from multiple perspectives over more than half a century, Idaho tells the gripping story of Ann and Wade, Wade’s ex-wife Jenny, and his murdered and missing daughters, May and June.”

Ann and Wade have carved out a life for themselves from a rugged landscape in northern Idaho, where they are bound together by more than love. In a wild emotional and physical landscape, with her husband’s memory fading, Ann attempts to piece together the truth of what happened to Wade’s first wife, Jenny, and to their daughters, June and May. 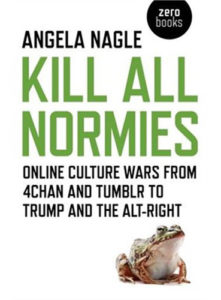 Kill All Normies: Online Culture Wars from 4chan and Tumblr to Trump and the Alt-Right
Angela Nagle

Do you ever wonder why and how Twitter went from a place for hilarious cat gifs to the seventh circle of hell with added swearing? Angela Nagle’s short book offers a salutary and fascinating survey of how online life went from excitement at the freedom of the net to a place for pitched battles between trolls from every part of the political spectrum. 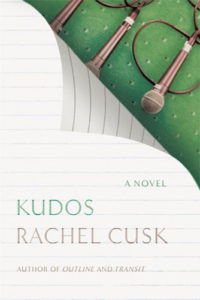 “The final book in her acclaimed trilogy makes for perfect holiday reading as it rewards reading in big chunks so you can fully appreciate the experience of her writing as it weaves in and out of other people’s lives. Reading this is like travelling with a very interesting friend (who you rather wish you were) who has something original to say on everything she turns her attention to whether it’s the future of commercial literary fiction, the illusion of immortality or the burial of a much-loved family dog.”

A woman writer visits a Europe in flux, where questions of personal and political identity are rising to the surface and the trauma of change is opening up new possibilities of loss and renewal. Within the rituals of literary culture, Faye finds the human story in disarray amid differing attitudes toward the public performance of the creative persona. She begins to identify among the people she meets a tension between truth and representation, a fissure that accrues great dramatic force as Kudos reaches a profound and beautiful climax.

In this conclusion to her groundbreaking trilogy, Cusk unflinchingly explores the nature of family and art, justice and love, and the ultimate value of suffering. She is without question one of our most important living writers. 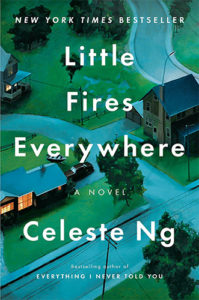 A fascinating exploration of the relationships between mothers and their children, social class, and societal expectations, this novel follows the tensions between the Richardsons (a foster family in their small town) and the Warrens (an artistic mother-daughter duo with a mysterious past).

Little Fires Everywhere explores the weight of long-held secrets and the ferocious pull of motherhood-and the danger of believing that planning and following the rules can avert disaster or heartbreak. 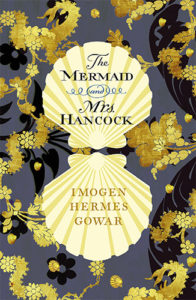 “Recent UEA graduate Imogen has produced a startling debut in The Mermaid and Mrs Hancock, a Georgian romp fizzing with period detail, intrigue and adventure on the high seas centred around the discovery of a very unusual mermaid. The perfect watery world for this steamy summer.”

One September evening in 1785, the merchant Jonah Hancock hears urgent knocking on his front door. One of his captains is waiting eagerly on the step. He has sold Jonah’s ship for what appears to be a mermaid.

As gossip spreads through the docks, coffee shops, parlours and brothels, everyone wants to see Mr Hancock’s marvel. Its arrival spins him out of his ordinary existence and through the doors of high society. At an opulent party, he makes the acquaintance of Angelica Neal, the most desirable woman he has ever laid eyes on… and a courtesan of great accomplishment. This chance meeting will steer both their lives onto a dangerous new course, a journey on which they will learn that priceless things come at the greatest cost… 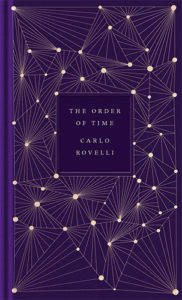 The Order of Time
Carlo Rovelli

“Full of so many ‘eh what!?’ moments that it would be perfectly accompanied by big views of the sea and sky and with not much else to do with the day than lie back on the sun lounger in wonder. And, if I’ve understood it correctly, time passes more slowly at sea level, so lie low and your holiday will last longer.”

Time is a mystery that does not cease to puzzle us. Philosophers, artists and poets have long explored its meaning while scientists have found that its structure is different from the simple intuition we have of it. From Boltzmann to quantum theory, from Einstein to loop quantum gravity, our understanding of time has been undergoing radical transformations. Time flows at a different speed in different places, the past and the future differ far less than we might think, and the very notion of the present evaporates in the vast universe. 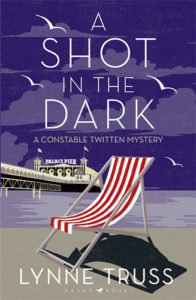 A Shot in the Dark: A Constable Twitten Mystery
Lynne Truss

Brighton, 1957. Inspector Steine rather enjoys his life as a policeman by the sea. No criminals, no crime, no stress.

So it’s really rather annoying when an ambitious – not to mention irritating – new constable shows up to work and starts investigating a series of burglaries. And it’s even more annoying when, after Constable Twitten is dispatched to the theatre for the night, he sits next to a vicious theatre critic who is promptly shot dead partway through the opening night of a new play. 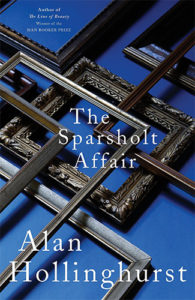 In October 1940, the handsome young David Sparsholt arrives in Oxford. A keen athlete and oarsman, he at first seems unaware of the effect he has on others – particularly on the lonely and romantic Evert Dax, son of a celebrated novelist and destined to become a writer himself. While the Blitz rages in London, Oxford exists at a strange remove: an ephemeral, uncertain place, in which nightly blackouts conceal secret liaisons. Over the course of one momentous term, David and Evert forge an unlikely friendship that will colour their lives for decades to come… 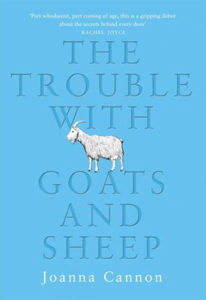 The Trouble with Goats and Sheep
Joanna Cannon

“This is a sweet story with a serious plot – Grace and Tilly style themselves as detectives when their neighbour goes missing. Set in the heatwave of 1976, the young girls accidentally reveal much more about their street than they ever anticipated.”

Mrs Creasy is missing and The Avenue is alive with whispers. As the summer shimmers endlessly on, ten-year-olds Grace and Tilly decide to take matters into their own hands. And as the cul-de-sac starts giving up its secrets, the amateur detectives will find much more than they imagined…

Do the walking tour of Norwich!

24 amazing bookshops from around the world