NCW Book Club: recommended reads for fans of AM Howell

If you enjoyed The House of One Hundred Clocks, we think you’ll love these books too

We hope you’ve enjoyed reading The House of One Hundred Clocks by AM Howell along with us here at NCW. There is still time to look back over the conversation on our Discord community, and you can have a go at this writing prompt or explore our questions for readers to help you get the most out of reading our chosen book.

If you’ve finished the book and would love something similarly brilliant to add to your ‘To Be Read’ pile, or need a little something for the young reader in your life, why not try one of these recommended reads?

For this list, Young Norfolk Laureate Callie Arlow has shared some of their favourite middle grade and YA reads from recent years, alongside the usual recommendations from Book Club members and NCW staff. There are options for a variety of tastes and ages, and we’d love to hear your recommendations over on Discord, too.

Our Book Club choice for February and March 2022 will be Boy In Various Poses by Lewis Buxton. Keep an eye on the main Book Club page for all the latest updates. Happy reading!

More by AM Howell 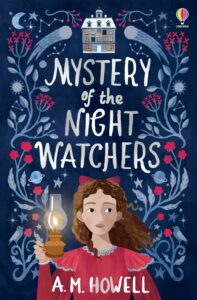 Mystery of the Night Watchers (Usborne)

AM Howell’s latest book is another delightful mixture of mystery, history and adventure. It’s 1910 and Nancy and her mother have just moved to Suffolk to live with her grandfather. And he has a strict new rule that Nancy is going to have to get used to: she’s forbidden to leave the house, or even open the curtain. But as Haley’s Comet lights the night sky and she discovers a secret observatory, it becomes clear that Nancy is about to uncover some very dangerous secrets.

The Garden of Lost Secrets (Usborne)

Set during the First World War, this is the story of Clara, who has been sent far from home to live in a cottage in the grounds of a country estate. With her father away and a terrible secret to guard, Clara soon begins to notice that not all is as it seems on the Earl’s estate. Featuring a locked room, a ghostly garden visitor and a fruit thief, Clara’s investigations bring her dangerously close to difficult truths in this pacey and evocative mystery story.

Like AM Howell’s books, ‘middle grade’ books are aimed at readers of around 8 to 12 years old, but can be enjoyed by older children and grown-ups too, of course!

The Thieves of Ostia by Caroline Lawrence (Orion)

It’s AD79, and Flavia Gemina, daughter of a Roman merchant, has just solved the mystery of her father’s missing signet ring. But soon another, darker mystery begins to take over Flavia’s neighbourhood in the port city of Ostia, and to solve it she needs the help of her friends Jonathan, Nubia and Lupus. Packed with historical detail and adventure, Caroline Lawrence’s Roman Mysteries series, of which this is the first book of seventeen, are a fantastic introduction to the mystery genre.

‘Halfway between prose and comic-strip, Omar’s stories are brilliantly vibrant on the page and will delight even reluctant readers.’ 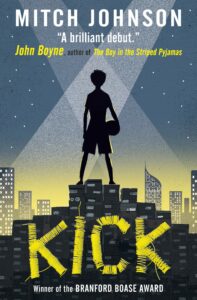 Mitch Johnson’s debut middle grade novel tells the story of Budi, who has big dreams that he hopes will take him far away from the Jakarta factory where he makes football boots: one day, he will be a football star. But soon he finds himself in trouble with an ominous landlord known as the Dragon… With a dash of adventure and a powerful message, Kick brings together stories and sport in an exciting way. 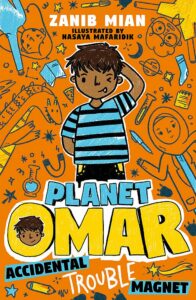 Zanib Mian’s unique writing style and Nasaya Mafaridik’s illustrations come brilliantly to life in the Planet Omar series. Halfway between prose and comic-strip, Omar’s stories are brilliantly vibrant on the page and will delight even reluctant readers. In this first book of the series, Omar has just moved to a new house and new school, and the class bully is out to get him. Luckily Eid is fast approaching and as long as Omar can keep out of trouble, treats and presents are just around the corner. But staying out of trouble is sometimes easier said than done…

Percy Jackson and the Lightning Thief by Rick Riordan (Puffin)

The first in the popular Percy Jackson series, this book introduces us to Percy, who is just like any other boy… apart from the fact that he’s half boy, half Greek god. Not only that, but after a misunderstanding about some lightning bolts, Zeus is out to get him. Callie says, ‘it’s a great chapter book for younger readers with a solid introduction to not only Greek Mythology but fantasy books too.’

Aimed at readers between 12 and 18 years old, YA books come in a huge array of genre, style and subject matter.

Written in an accessible but powerful blend of fiction and poetry, The Poet X is a story about finding the courage to use your voice. Xiomara loves words and secretly writes poems in her notebook whenever she can. But when it comes to expressing herself aloud – whether in class, with friends, or around her neighbourhood – sometimes it feels easier to remain silent. But a slam poetry club will soon have Xiomara sharing her words and her voice for the first time. 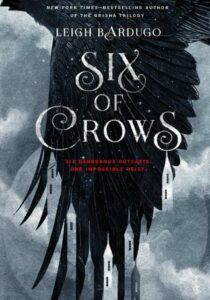 From bestselling US author of the Shadow and Bone series, Six of Crows tells the story of six outcasts who come together to pull off a dangerous heist in the fantasy world of Grisha. ‘This is my favourite book of all time,’ says Callie. ‘It’s a high fantasy novel with a strong plot and a diverse range of characters. The characters are all lovable and it has a great mix of action and restful moments. The relationships and motivations of the characters are realistic and believable. I can’t say enough good things about this book.’

Alix E Harrow’s The Ten Thousand Doors of January comes recommended by Book Club member Katerina. It tells the story of January who lives in a strange mansion filled with peculiar objects. In the mysterious rooms of the house, January discovers a book whose story begins to entwine with her own in unexpected ways. A book that celebrates stories and storytellers, Katerina notes that the book is ‘wonderfully written’.

The Boxer by Nikesh Shukla (Hodder)

Sunny has just moved to a new city, and it’s difficult enough to fit in even before he’s the victim of a racist attack. Determined to protect himself as tensions rise in the city around him, Sunny takes up boxing and finds the friends and confidence he’s been looking for. Written with Nikesh Shukla’s trademark verve and sensitivity, The Boxer looks at real world issues through a story that will have teenage readers hooked from page one.

NCW Book Club: The House of One Hundred Clocks by A.M. Howell

Try this writing exercise to generate stories from inanimate objects

A Line Made by Walking – questions and activities for readers