On truth, discipline and expression beyond words

Jennifer Anne Champion is a Singaporean writer, archivist and educator of mixed heritage. She is the author of two poetry collections and her current interests lie in the intersections of textile art and the written word. As part of her virtual residency with the National Centre for Writing in June 2021, Jennifer was asked to provide five essential pieces of advice for fellow writers.

When I first started writing poetry, I listened to many writers advise that you should be disciplined and write every day. Fight the blankness off the page. Fill it with your every thought. Write even when you don’t want to. Write through the struggle.

I accepted this advice at face value and now my home is stuffed with notebooks and my electronic devices with notes – all rubbish with not much of a system so looking through for inspiration causes me to panic and disassociate. While there is truth to getting out the nonsense to get to the good stuff, it is not true of what discipline in writing really means.

Discipline is the grounding of the mind in order to write with precision.

The idea of writing through struggle while useful is also self-punishing. It can produce a writer who no longer comes to the page in joy. So rather than forcing myself to write everyday, I make access to writing easier for when the idea or thought comes to me. I do not beat myself up for not having an idea conveniently. And I do not regard these pre-poem jottings as poems either but rather as raw material.

Permit yourself to sit with the words, thoughts and images – the mess – and then pick cleanly the most interesting ideas. These ideas can further be put not on the blank page but on rough paper – like a palette of shades from which to paint – but remember the palette itself is not the art (most of the time!).

Permit yourself to sit with the words, thoughts and images – the mess – and then pick cleanly the most interesting ideas.

I find producing this pre-poem text first (which is sometimes not even in words!) and throwing it away later to reduce my clutter soothes me and allows me to make work that is more exact in what I want to say. This system for me (and my students over the years) is much less overwhelming than sitting with just the blank canvas and being told a poem has to come out ready-made.

Writing begets writing, or does it?

The way in which we generate ideas is not always via textual language. In getting students to think more about imagery, I often get them to draw their ideas instead of writing them. The act of drawing makes you think of physical form in detail, all of which now noticed can go into the text. This can make the idea that you’re writing about much richer.

I’m sure this method of data collection can be repeated with other sense techniques. Touch with texture. Sound with, among others, onomatopoeia and rhythm. But my larger philosophy under this is to be open to how we think of writing poems and how (with technologies new and old) we may make poetry writing more accessible to ourselves and others.

For example, in 2013 as I was preparing to perform in a spoken word show for the Lit Up! Festival in Singapore, I became afflicted with Kawasaki Syndrome. It affects the tiny blood vessels in your body causing them to swell and be extremely sensitive to pressure. At the time, I could not use my hands for fine motor skills and had to wear thick gloves to provide relief. Opening and closing doors, holding a pen, sometimes even typing was painful. But I had to produce a solo work and three group pieces with other spoken word artists.

I produced the piece ‘Ballet Class’ which was about childhood experiences in the classroom learning dance and other life lessons. But at the bones of this piece’s creation was the use of video and age-old oral techniques. I filmed myself dancing (in the limited way I could without putting pressure on my hands) and replayed these pieces while recording my voice improvising lines over the movement. Gradually a poem built up in my memory from repetition of this process with edits were made when my group mates saw me rehearse. This particular process is much longer than traditional writing, but it taught me to be open to different modalities of creating a text.

As I embark on now on using embroidery skills I picked up during the pandemic in service of my poetry-writing for the National Centre for Writing, I am excited to experiment again.

I wasn’t a writer in my early life nor did I have a desire to be one until at age 22, someone I was dating said I had a poet’s face (what does that even mean?) and I started trying to write poetry in order to impress him.

The poetry was bad. I didn’t have the years spent practising or thinking about what I wanted my writing to be. Sometimes, I’m embarrassed that what some poets call ‘juvenilia’ – my juvenilia – is published in my first book A History of Clocks. I wish I had known in my teens that this would be the trajectory of my life and spent those years writing and preparing for it.

But what I did write back then in my diary was a lot of lists. Things to do. Things to see. Things I’d heard. When I was 14, perpetual lists of people I had crushes on with further lists on why.

Keep lists on a variety of subjects. The more personal, the better.

The list has a comforting order to it but it’s also flexible in its use and its rules can be broken quite easily when you get bored. Its natural form also makes it ideal to convert into poetry.

Keep lists on a variety of subjects. The more personal, the better.

My current lists that I’m maintaining are Malay idioms to do with embroidery, funny things I hear out of context in Netflix shows (cooking shows are my favourite), and words I find interesting beginning with the letter C. Sounds random and idiosyncratic? Yes. But it’s great material for future poetry and even if it doesn’t come to that, I’m amusing myself, which brings me to my next point.

I have great sympathy for people who find writing to be profoundly anxiety-producing. I have even more sympathy for them when they ask for advice and are told to write through this pain. While there is value in writing about pain and writing through it is often considered heroic and prize-worthy, the truth is that due to overwhelming saturation of content in the world, these efforts bring very little gains for even the writer of moderate success.

Therefore, let your writing be about play. Whatever the genre or content is, if you find yourself suffering in the process, stop. Re-evaluate and think about what you can do to find joy in the process whether that’s the method of creation or even starting over on something else.

Let me be clear that this is not to say you should give up entirely because I fervently believe that language builds our worldview and we should take the endeavour to construct, deconstruct, and elevate our abilities and sensibilities. For those of marginalised identities, the endeavour to voice to self is crucial because we live in a world that likes to speak over us and in doing so takes away our agency.

But it is important to be stimulated by the endeavour, not destroyed by it.

We are moved by truth

But I think a lot about why people are moved or remember things I don’t find particularly clever or beautiful. The most quoted phrase I’ve seen people use of my work is the line ‘[That] a dream is the most expensive asset to own in this city’. It comes from my poem ‘Paradise City’ which is about my land-starved but prosperous country. Despite its high GDP, the average Singaporean is often unhappy with the price of everything – literally and figuratively. What we do have is our dreams and those are free to own. The use of the word ‘asset’ – which in retrospect I think clunky – also perhaps speaks to my countrymen concerns about personal wealth. One constantly worries here about financial stability. I believe the laughter I hear when I perform this particular line in the poem is bittersweet.

I believe a return to personal truth is the new sincerity. It cuts through to the heart

The truths of where you and your community are in life have a force to them which can trump even the clumsiest ways of articulating them. There is no need to tell truth aslant, even if you’re told that is what a poem should do (although you’re very welcome to). Particularly in a content-saturated internet age that actually does value cliché (think: the meme), I believe a return to personal truth is the new sincerity. It cuts through to the heart and more than ornamentation, plotting, conceits, is what people remember and carry with them.

When you are stuck being beautiful with your words, tell the truth instead. 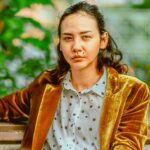 Jennifer Anne Champion is a Singaporean writer, archivist and educator of mixed heritage. She is the author of two poetry collections and has been published in the Quarterly Literary Review of Singapore, Esquire magazine and her national newspaper, The Straits Times. Her prose was also published in The Epigram Books Collection of Best New Singapore Short Stories edited by Cyril Wong in 2016.

Jennifer started writing poetry in 2013 and became a regular voice in the spoken word scene with around 15 slam wins under her belt before publishing A History of Clocks and Poems Read Aloud (Redwheelbarrow Books, 2015) and Caterwaul (Math Paper Press, 2016). She has since been focussing on teaching spoken word and the literary arts in public and international schools in Singapore. Jennifer is also a co-founder of poetry.sg and served as its Multimedia Editor from its inception to 2019. During her time, she helped expand the collection from poetry in English to include Malay and Chinese works.

Jennifer’s current interests lie in the intersections of textile art and the written word. A recent and avid embroiderer, Jennifer used her virtual residency with the National Centre for Writing to explore textile traditions in Singapore and Norwich and to see how this may translate into her work in poetry.

Read how Jennifer Anne Champion explored textile traditions in Singapore and Norwich, to see how this may translate into her poetry →

Jennifer’s residency was generously supported by the National Arts Council of Singapore.