‘Our ramble around the city turned into an adventure’

While I was staying in Norwich for a month of writing, my children came to visit me for the Easter weekend. They’re called Simon and Levi, and they’re nine and five years old. They stayed with me from Friday evening to Sunday evening, right in the middle of my residency. That worked out well, because it meant we didn’t have to miss each other too much. And their trip to the UK gave them a fantastic opportunity to see what their mother was up to while she was away from home.

Kate Griffin, of the National Centre for Writing, had given me a long list of child-friendly activities and attractions, but on Saturday morning I decided just to start with a walk. So I set out with them, along more or less the same route I’d done with Kate a few days earlier. It was a pleasant surprise for me because the children had always been reluctant to go out of doors before, but our ramble around the city turned into an adventure. So it really does stand out as being special, even though I now love walking around this beautiful city on my own.

As soon as we were out of doors, we were by the water and the boys really liked that. You see, Dragon Hall stands almost on the banks of the River Wensum, the river that flows right through the city. They made an enthusiastic sprint for the Lady Julian Bridge and when they got there used the white lines painted on its tarmac for balancing exercises. We turned left and went along the Wensum, keeping the river on our left. The next point of interest was the fence beside the water. The boys climbed onto the railings and tried to move along them for as long as possible without touching the ground.

As we got closer to the big weeping willow a little further on, almost at the Foundry Bridge by now, the boys immediately spotted its climbing potential. I gave them a leg-up and both of them climbed up into it. It was wonderful to see how much they were enjoying themselves. A photo session? Of course! I got the best shots when I put my phone against the tree trunk and pointed it up at the foliage and the boys. They seem to be immersed in their own green world in those photos.

We crossed the Foundry Bridge and carried on along the river, via the terrace belonging to the Compleat Angler pub. The Wensum was now on our right and there was no fencing here. I told the children that if they wanted to chase the pigeons they would have to be careful, because it even said on the signs here: ‘Caution. Unfenced River’. The oldest rolled his eyes. ‘Duh, I can see that anyway,’ he said. I explained to him that they even had to close this path after sunset, because the people who’d been drinking too much in the pub could lose their step and land in the water. But the older boy was critical about that too. ‘So, they shouldn’t drink so much then!’ he shouted. A kid’s common sense – hopefully he’ll hang on to that.

And so we reached Pull’s Ferry. I didn’t have to encourage the kids to go through the flint gateway. They raced right through it and came out by the bank of the river. They stood at the water’s edge, feet almost in the water, then bent down, picked up some pebbles and flung them into the river. The boys gazed entranced at the dozens of little concentric circles the stones made as they broke through the surface of the water, and listened to the plopping sounds. It almost seemed to be raining.

When the kids had got messy enough from their adventures by the water, I asked them to choose. We could either go home by the same route, or go into the city and visit a wonderful shop that only sold teddy bears. To my delight, they immediately fell for the second idea. So I coaxed them up Ferry Lane towards Elm Hill for a visit to The Bear Shop. But before we got there, we had a few more sights to see. The blossoming cherry tree on the green of the Cathedral Close, for example, where we had yet another photo session. I could see in the distance, through my camera lens, that the door of the cathedral was open. ‘Boys!’ I called out. ‘We should really pop inside. Look, what an enormous church! I bet it’s really beautiful!’

We went into the cathedral garden via The Refectory and the boys were immediately won over. Wow! And a lift too! That’s the kind of thing they love being in anyway. Especially a glass one, like this. We went in the lift, then one more time, and one more time again. After that we carried on walking, into the cathedral. We went all the way round: from the souvenir shop at the end of an aisle, to the bishop’s tomb in the transept, and then right round the ambulatory before turning back to the exit. The older boy thought the graves in the church were creepy. He didn’t like walking over the dead bodies. And so that turned into a game too: avoiding the gravestones in the floor. But it meant they had to hop!

Once we were outside again, we went through the Ethelbert Gate and emerged into Tombland. I pointed out the typical red telephone boxes, like little prison cells, really, and they asked if they were still working. ‘Unfortunately not,’ I said, ‘that was when there weren’t any mobile phones yet.’ ‘Now everyone’s got their own red phone cell in their pocket,’ my youngest said. That made me laugh, and then the thought jumped into my mind that this might be why mobile phones are sometimes called cell phones. That would be funny.

We stopped for a moment at the Tombland Bookshop, but because the younger one was beginning to get tired we carried on towards Elm Hill and The Bear Shop. Wow! Finally! The boys tumbled ahead again and before chasing after them, I photographed them from behind as they pushed open the door of the shop. A veritable paradise. They’re simply mad about teddy bears. After scrutinizing everything for a full quarter of an hour, they chose a super-soft brown one, which cost almost twenty pounds. Phew! That wasn’t too bad at all, because the other bears were much more expensive, mainly because they were nearly all one-offs. I’d managed to put the Shrek that cost almost three hundred pounds out of their heads, by telling them you could buy a Nintendo Switch with that amount of money. That put things in perspective. The lady in the shop wrapped the teddy up in paper, with its little face peeking out so it looked exactly like Baby Jesus. Full of pride and emotion, we left the shop as if it were a maternity hospital.

By now it was almost noon. Time to head straight home. We found our way back to King Street via Tombland and Upper King Street and, feeling happy and satisfied, arrived back at The Cottage, where I made spaghetti for the boys. I was so pleased to have seen roughly the same walk I’d done with Kate through completely different eyes. And I wouldn’t need that list of fun things to do now either, I realized. Tomorrow, Sunday, we would cross the Lady Julian Bridge again and this time we wouldn’t turn left, but right, towards the Carrow Park football stadium and the playground there. I knew for sure now that this would keep them happy for at least two hours. 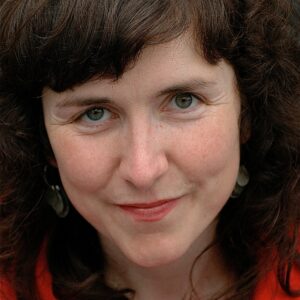 Sylvie Marie visited Norwich in April 2022, as part of our exchange with Passa Porta. She is the author of four poetry collections: Zonder (Without), Toen je me ten huwelijk vroeg (When you asked me to marry you), Altijd een raam (Always a window) and Houdingen (Positions). She co-authored the football novel Speler X (Player X). She has won several poetry slams and likes experimenting on stage and interacting with the audience. Translations of Sylvie Marie’s poetry by Richard Berengarten appeared in Shearsman 125 / 126 in October 2020. During her residency, Sylvie worked on #grampoems, new poetry and translations of her work into English.

A practice in descriptive writing

How do you write about a place that you have never been to?

Catalogue of a Private Life