A World of Imagination

Sarah Bower, General Manager at the National Centre for Writing, spent a day at the Voewood Summer Social 2018; ‘the most perfect house on the planet.’

One of the luxuries of writing fiction is that you have a free hand to locate your characters in any setting you like. For my novel, Erosion, I needed a country house. Not ostentatious but beautiful, substantial but not enormous. For me the choice was obvious: Voewood House near Holt, to my mind the most perfect house on the planet, the finest of three Arts and Crafts butterfly houses in Norfolk. Having spent so much time immersed in my imagined version of the house, it’s been a privilege to be invited back there, firstly four years ago to read from Erosion at the 2014 summer festival and then this weekend, to the salon at the 2018 Voewood Summer Social.

Children’s Laureate, Lauren Child, was the headline act, in conversation with Paddington producer, Alexandra Derbyshire, about the art of storytelling through words and pictures. A lively audience of young readers fresh from the face painter (and their parents and grandparents) heard how Lauren had learned the power of telling stories through pictures by watching movie matinees on TV as a girl – everything from Hitchcock to Edward Scissorhands, from which she learned that, for her, the images – of the characters and their world – come before the words. Lauren works in collage for her best known Charlie and Lola books but has recently produced a version of The Princess and the Pea using the principles of stop-frame animation with models in a doll’s house. In response to a question from a young audience member about how she had avoided the tropes of spy fiction in her Ruby Redfort series, Lauren said she aimed to make her characters her ideal friends. She follows her own instincts rather than the so-called rules.

At the end of her talk, Lauren kindly offered a storyboard from the Charlie and Lola TV series for auction in aid of the Holt Youth Club which raised over £300.

I didn’t attend every event of the day due to pressing engagements with a tasty Jamaican-style barbecue and a cream tea, but very much enjoyed Willie Athill in conversation with Henry Layte about his work in progress, a memoir of an English life of a certain quintessential, dashing kind spent knocking about Africa as a soldier and trader. I learned from Moin Mir, author of The Prince Who Beat the Empire, about the Nawab of Surat who took on the East India Company and precipitated its downfall, that Queen Victoria was partial to a curry. His interview, again with Henry Layte, led to an interesting debate about colonial history and revisionism, and the way history is currently taught in our schools. 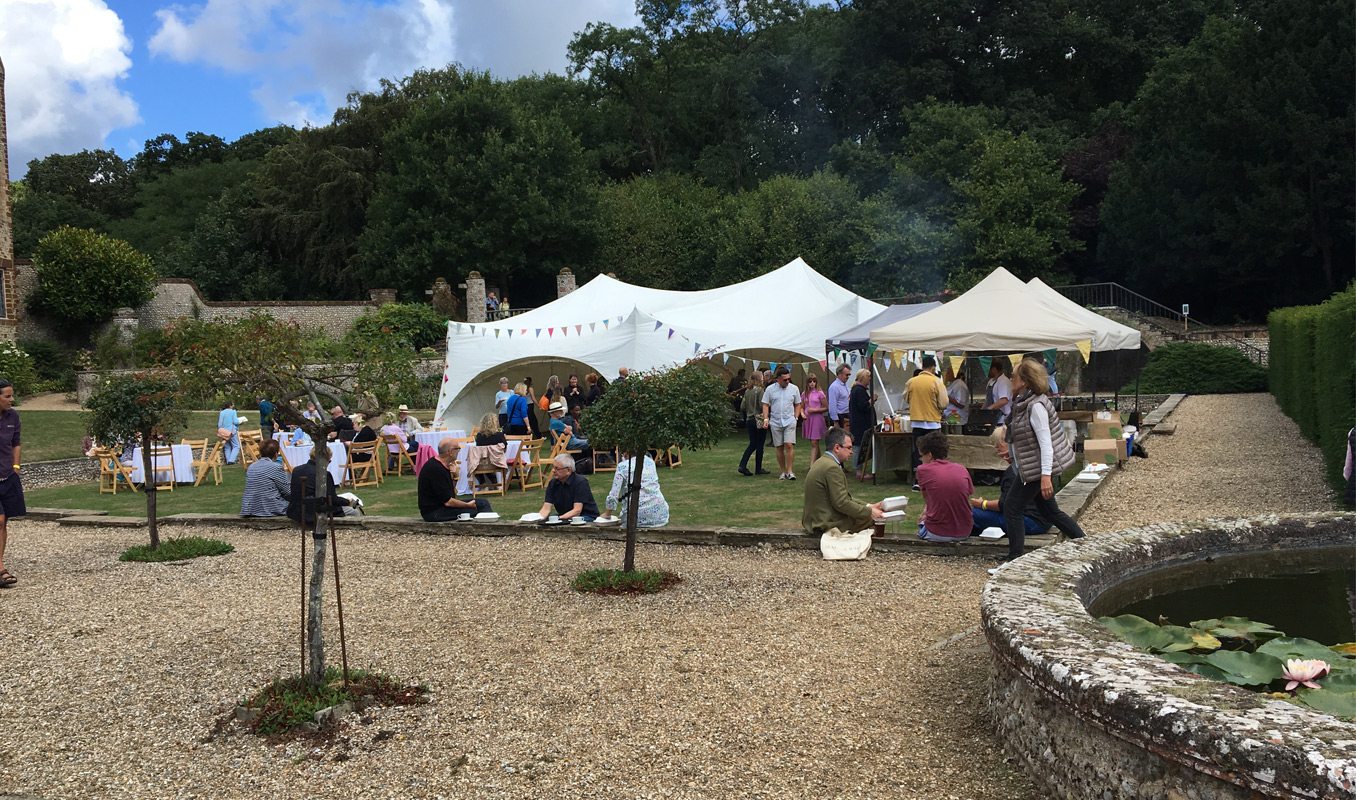 My personal highlight was listening to Simon Finch, current custodian of Voewood and the man responsible for reviving its fortunes after several years as a care home, talking about his career as a seller of rare and antiquarian books. His passion for books, not just for words but for the objects themselves, shone through as he talked knowledgeably and entertainingly about everything from first editions of Newton’s Principia Mathematica to the literature of the counter culture showcased in his Notting Hill bookshop which ‘looked like a set from Barbarella’ and was opened by Hugh Grant reprising his role as a bookseller in the movie Notting Hill.

The ground floor of the house was given over to a range of second hand and antiquarian booksellers where I had a good browse and picked up a few treats, including Akiyuki Nosaka’s The Whale That Fell in Love With a Submarine, translated into English by Ginny Tapley Takemori, alumna of a series of translation masterclasses in 2012 and 2013, set up by our very own International Programme Director, Kate Griffin, when at the British Centre for Literary Translation, and funded by the Nippon Foundation.

The day ended with a couple of gin and tonics, chatting to friends while a calypso band tuned up for the evening session, watching the sun set behind Voewood’s woods and make way for a full moon. I thought of something Simon Finch said when asked about how he decided what books would sell. ‘If it’s beautiful,’ he said, ‘someone will buy it.’ How lucky that Simon acted on his own dictum when he bought Voewood and opened it up to days such as these: barbecue smoke, wasps trapped under upturned glasses, the evening cool after a day of benevolent sunshine, excellent conversation and books everywhere.